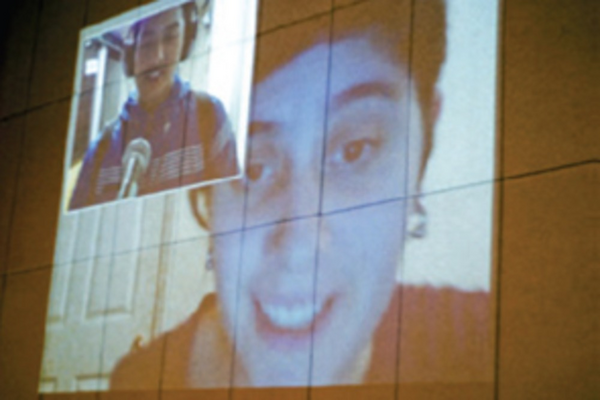 Is it a hybrid art practice?

Alone + Together is a 2011/2012 Visiting Artists Series presented in collaboration with the University of Windsor's School of Visual Arts and the AGW.

Artists work in a number of capacities - as educators, administrators, organizers and activists to list a few. Three leading Canadian artists Lise Beaudry, Gina Badger and Reena Katz will speak about their experiences as they juggle multiple roles and maintain an important art practice, while building community and mobilizing discussions through their "day jobs" as cultural workers and organizers.

Lise Beaudry's photographic work has been exhibited in several Canadian cities, the U.S, Romania, and Arles, France during Les Rencontres Internationales de la Photographie. In 2002, her first video, LeTourbillon won her the Best Upcoming Toronto Video/Film maker at the Inside Out Film Festival as well as the Audience Award at the Dublin Lesbian & Gay Film Festival. In 2003, she cofounded Alley Jaunt-local art in local garages-an alternative Toronto annual art event transforming the back alley garages surrounding Trinity Bellwoods Park.

Gina Badger is an artist and writer working in the expanded field of sculpture and installation. Her favoured research methods include listening, walking, eating, and drinking. She has presented work at international venues including The Kitchen (NYC); LACMA (Los Angeles); Issue Project Room (NYC); and the London School of Economics and Political Science (UK), and has recently published in the journals No More Potlucks, Scapegoat and Public, and in Byproduct: On the Excess of Embedded Art Practices (YYZ). Gina Badger is working between Toronto, Montreal, and various locations south of the 49th parallel. She is the editorial director of FUSE Magazine.

Reena Katz works with the transmission and reception of sonic information present in the human voice. She uses live and recorded talking, whispering, yelling and listening to consider bodies as sites of knowledge, and communication as a social and political practice. Through audience participation in public spaces, Katz highlights the relationship between collective voice and the empathic act of listening. Her projects take shape as installations, recordings and live performances. They have been performed, played and exhibited widely in North America and Europe.