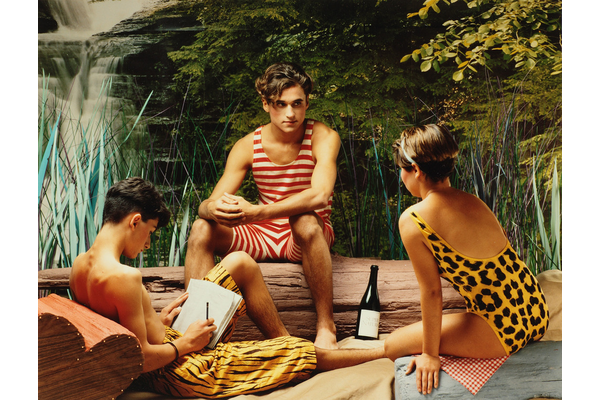 David Buchan’s (1989) Canadian Youth is a near faithful photographic (re)production of the  Charles H Scott (1937) painting of the same name. David uses his source images as a “point of  departure.” (1) He does this through staging the scene in his works, playing with the meaning of the  image to draw our attention to the constructed ‘reality’ of mass media.(2) Although a departure from  his earlier process of inserting himself as the subject into his (re)productions, Canadian Youth heightens our awareness to the fabricated reality of advertising media. (3,4) David reminds us that mass  media culture is always trying to sell us something that we lack but which is not ‘real’. The saturated  colour profile in Canadian Youth gives us a general idea that the ‘reality’ presented is not what it  seems. David plays with the original details in the image meant to portray a ‘happenchance’ nature scene in British Colombia. Sand becomes a tan tarp. The people are props. The idyllic forest  backdrop becomes a print from a wallpaper store. A wine bottle is inserted, labelled “Super,  Natural” referencing the BC’s Ministry of Tourism slogan.(5) These pieces come together to draw our  attention to the image’s staged ‘nature.’ Nothing here is real. As a queer non-binary woman, I was  initially drawn to a narrative of queer desire that I found in the image. However, upon further  engagement with David’s work, I see this image reaching across time to remind us of the modern day commodification of queer and trans identity (i.e., rainbow capitalism). Canadian Youth stresses  that our representation in mass media is being done to sell something back to us.

Janet MacIsaac is a white, queer, non-binary woman living in so-called Windsor while she completes her PhD in Applied Social Psychology. Janet’s research focuses on trans embodiment and materializing gender euphoria through visual methods, particularly photography. When not working on their  degree, Janet can usually be found biking in the county.

2 Maher, Sabrina. (2014). An Introduction to the language of partial seduction: Works by David Buchan [Unpublished master’s  thesis]. University of Toronto.

3 This shift appears to be related to a decline in his health from HIV/AIDs, which he contracted near the end of the  1980s, see Maher (2014).

5 This is an interesting reference as at the time the government was dealing with issues of clear-cutting old growth forests (see Stacey, 1993). Apparently, the advertisements were handled by an agency that staged the tourism commercials, thus  the ‘super, natural’ BC is a fabricated reality. The placement of the wine bottle in the image with this message acts to  further reinforce the fabricated reality of what we are viewing and that we are being sold something in this image.