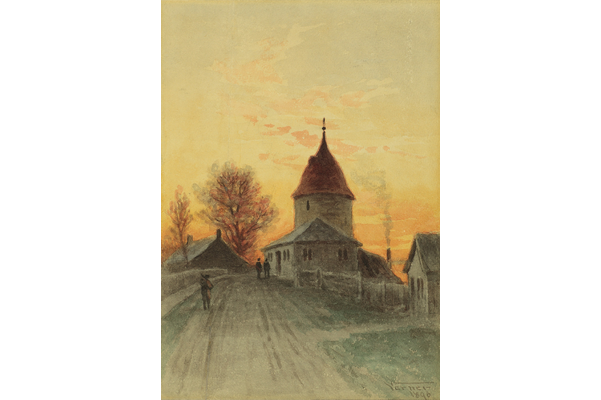 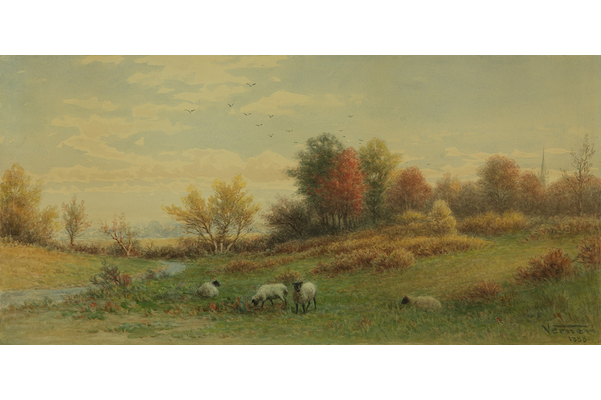 Frederick Verner, Near Sandwich, Ontario, 1888, watercolour over graphite on paper, 31.0 cm x 64.0 cm
Purchased in memory of Miss Noreen Webster with funds raised from the sale of articles from her estate, 1977, 1977.054
PreviousNext

Fredrick Verner was a watercolourist who created works in the late 1800s. Two of his works caught my attention, an 1888 piece entitled Near Sandwich Ontario, and an 1896 piece entitled Sunset, Sandwich Street West, Windsor, Ontario. The 1888 piece is pastoral; a river curves through a greenland on which sheep have been put to graze, a faint spire can be seen in the background. The 1896 piece provides a main street presented in perspective; a prominent brick building is showcased on each side of said street.

I believe these works provide evidence of what existed at the time. I set out to discover their location in relation to the modern city. After extensive research, I came to the conclusion that the painting Near Sandwich Ontario is of the mysterious Ruisseau de la Vielle Reine, a waterway sometimes referred to as The Old Queen.  Sources from as early as 1749 cite the stream as a reference marker for the location of Assumption Church and the Huron Village.  In today’s world, the curvaceous stream likely started in McKee Park, winded its way in the direction of Detroit Street then snaked itself back towards Indian Road and Wyandotte St. West, thus enabling its flow to be seen from the kitchen garden of the McGregor-Cowan house.

The exact location depicted in the second painting was less obvious to me. My first guess was that it was of the lighthouse and tavern located on Riverside Drive. My second guess was that it could be an early version of St John’s Parish, along with a school that might have predated the current General Brock Public School. Although my research continues, I think it is important that Verner’s works are showcased as testaments to Windsor's hidden geographic history.

Reginald S.Tolson is a lifelong student of many disciplines. He currently lives in Sandwich, Windsor Ontario.

Frederick Verner, Near Sandwich, Ontario, 1888, watercolour over graphite on paper, 31.0 cm x 64.0 cm
Purchased in memory of Miss Noreen Webster with funds raised from the sale of articles from her estate, 1977, 1977.054
PreviousNext