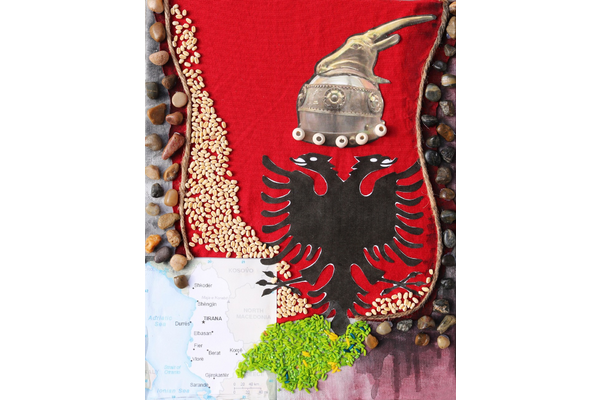 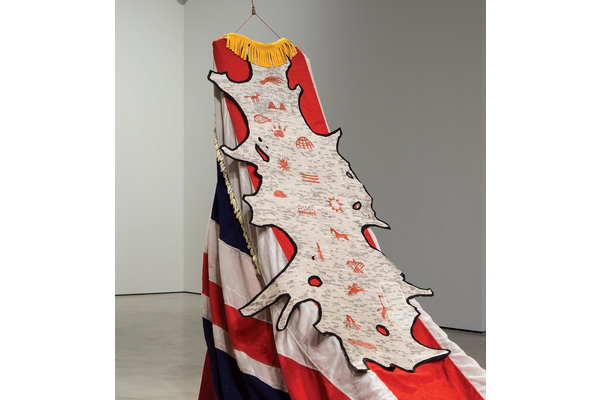 I am very familiar with the Art Gallery of Windsor and its collection having attended many of the exhibitions throughout the years. When I was introduced to Bonnie Devine's Treaty Robe of Tecumseh, it reminded me of one of Albania's National Heroes: Gjergj Kastriot Skanderbeg. The similarity between these two leaders is that they both united groups and gathered forces to protect the land. Gjergj (George) Kastrioti (1405-1468), known as Skënderbeu or Skanderbeg, was an Albanian nobleman and military commander who led a rebellion against the Ottoman Empire in what is today Albania, surrounded by Montenegro, Kosovo, Macedonia and Greece.

Skënderbeu united all the independent Albanian principalities and created a powerful state in the first half of the 15th century. In 1444 he organized The League of Lezhë, which is considered the first unified, independent Albanian country in the Medieval age, where he was appointed commander in chief. His memory always remained alive in the songs, folklore and numerous folk tales that gave him the features of a legendary figure even after his death.

Both these heroes Skënderbeu and Tecumseh, became a symbol of the struggle for freedom and independence. This storytelling conceptual artwork has details representing Albania by combining various media, such as beads, fabric, yarn, paper and paint on stretched canvas. The images and materials are used to symbolize the battles of decolonization and freedom. I am delighted to present my own mixed media artwork version.

The Flag of Albania is a red flag with a black double-headed eagle in the center.  When Albanian national hero Gjergj Kastrioti Skanderbeg fought against the Ottoman Empire during the 15th century, he carried a banner with the two-headed eagle to unite his people north and south. The red color stands for bravery and strength. The goat on Skanderbeg’s helmet means protection and victory. Goats can survive and live free in nature without any risks, were the goat walks no other animal can walk. The Rope is designed in a way that mirrors the Emblem of Gjergj Kastrioti Skanderbeg. Green coloured rice, represents the green coast of Albania and the rocks on the sides of the work represent the paved streets with limestones, originated from Greek, Byzantine cultures and Ottoman era.

Suela Prendi started drawing in her early childhood and still carries this passion today. During her school year, she studied Fine Arts and Elementary Education. She loves teaching art and talking about it every time the opportunity arises. She encourages creativity, imagination and bringing ideas to life. She works with watercolors, acrylics, oils, ink and experiments with clay. She paints still life, figures, landscapes, floral and abstract. Besides drawing and painting, Suela likes to go jogging, swimming, walking outside, photography, writing, cooking and listening to music.